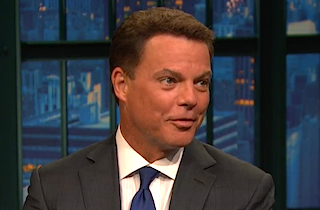 When Seth Meyers brought up Donald Trump during his sit-down with Fox News’ Shepard Smith last night, the anchor was quick to stress that he is not looking for his own feud with the GOP frontrunner. “I try to go the other way,” he said of any potential run-ins with Trump. “So I figured we’ll just let Megyn Kelly have him,” Smith joked. “She’s doing a fine job.”

Smith went on to defend the way his colleague Megyn Kelly treated Trump during the first Republican debate. He said Fox only became “part of the story” because she “asked a relevant question that the candidate didn’t want to answer.”

“At some point he’s going to have to have an answer for that,” Smith said of Trump’s misogynistic history. “Just as all the candidates have to be held accountable for all that they’ve done to this point, it’s part of the process.” The fact that Trump turned the question around onto Kelly was “telling” for Smith and he said he hoped CNN would press him just as hard at the next debate.

As for Fox’s defense of Kelly, Smith said, “Miss Megyn does not need our help.”

Later, Meyers pushed Smith to reveal his political preferences, which have mostly stayed under wraps because he does not share his opinions on air like so many of his fellow Fox News hosts. For instance, did he vote for President Barack Obama? “No,” Smith replied, before adding after a pause, “I might have lied.”