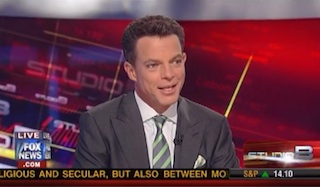 Today on Studio B, Shepard Smith and Judge Andrew Napolitano were discussing the latest rounds of doping allegations against Lance Armstrong. Maybe I’m just projecting here (I’m more of a fan of dope than I am of cycling), but it appeared that Smith just plain got bored with the story. After Napolitano gave his analysis, Smith cut in asking “I wonder if [Armstrong] was taking V.”

For those of you that don’t watch HBO monster soap operas, “V” is literally vampire blood.

Smith then took complete control of the conversation, attempting to persuade Napolitano to watch True Blood because “it just began on Sunday” and “Sookie is as weird as ever!” Well, it’s hard to argue with that.

Satisfied that he had made a good enough pitch on Napolitano, Smith turned his attentions to legal experts Arthur Aidala and Randy Zelin, asking them if they watched the show. It led to this truly amazing conversation that was actually aired on television.

AIDALA: I’m asleep by the time [True Blood]’s on.

SMITH: Do you have DVR? You should record the True Blood.

SMITH: Yeah. Or we’ll give you the True Death.

AIDALA: I didn’t know it was that good. I just do the Mad Men.

AIDALA: The Newsroom show is coming up.

SMITH: That is coming up. It’ll be on right after True Blood.

Besides the fact that I have no idea why everyone in this conversation felt the need to add the word “the” before everything, this is maybe my favorite moment of television ever. And I don’t even like True Blood (sorry, Shep!).

Every news segment should just be an anchor speaking to himself and wondering if Lance Armstrong could beat up werewolves.