Shep Smith On Lukewarm Gun Control Support: ‘If We Stuck With The Polls, We’d Have Had Slavery A Lot Longer’
video

Shep Smith On Lukewarm Gun Control Support: ‘If We Stuck With The Polls, We’d Have Had Slavery A Lot Longer’ 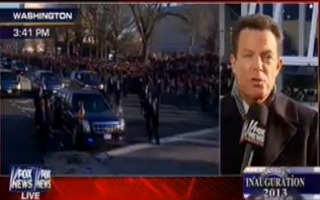 In a conversation with The Hill editor A.B. Stoddard, Fox News Channel anchor Shepard Smith expressed his frustration with the lack of demand among lawmakers in Washington for new gun control measures. Stoddard observed that there is no consensus in public opinion polling data on gun control, and even less consensus among lawmakers on what new measures to adopt. Smith countered by insisting that had America’s lawmakers relied on polling data alone, “we’d have had slavery a lot longer than we did.”

RELATED: Fox’s Shep Smith: Republicans On ‘Wrong Side Of History’ On Gay Marriage

Smith noted that President Barack Obama made some promises during the campaign which he must fulfill in his second term. He said that, although the election occurred prior to the Newtown massacre, doing something to curb gun violence was among those promises.

Stoddard agreed, but said that there were some measures that were politically infeasible. “We’re not going to see any kind of banning of ammunitions or weaponry,” Stoddard said. “We hope that there is some kind of consensus and that could be background checks.”

“Large capacity magazines?” Smith asked. “No chance for that?”

“Right now, the numbers don’t exist on the Republican or Democratic side,” Stoddard replied.

“The polls show a change in support,” Stoddard insisted. “If you poll the members of Congress…”

“If we stuck with the polls, we’d have had slavery a lot longer than we did,” Smith countered.

“That is true,” Stoddard agreed.