Fox’s Shep Smith: Pretending Wisconsin Is About A Fiscal Crisis Is “Malarkey” 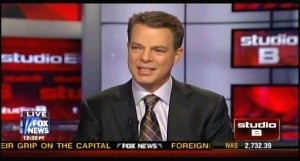 Shepard Smith‘s conversation today with commentator Juan Williams would likely surprise loyal viewers of both Fox News and MSNBC. Shep’s repeated assertion that there is no longer a budget crisis in Wisconsin and that the battle in the state is all about politics and union-busting was most shocking because that’s the exact argument many of MSNBC’s commentators have made, and continue to be suggesting.

Shep suggested that the Democratic party could be in big trouble if their biggest donors, the unions, lose their power and summed it up as “bust the unions – it’s over.” Furthermore, Shep brought up the fact that the “Koch brothers, among others, were organizing to try to bust labor – it’s what big business wants to do.” Given that the Koch brothers contributed to the campaign of Wisconsin Governor Walker, Shep said people should not be surprised that now they want unions busted. Despite Shep claiming “I’m not taking a side on this, I’m telling you what’s going on,” Williams warned Shep that “just by telling the facts, you’re angering a lot of people.”

Oddly, it seems Shep’s unexpected disclosure of facts does give some credence to at least the Koch brothers component of Ed Schultz‘s argument that the union showdown is part of a right wing “master plan.” However, given that Shep adamantly declared “to pretend this is about a fiscal crisis in the state of Wisconsin is malarkey,” it seems like Fox News’ participation in such a “master plan” isn’t what Schultz might have suspected.