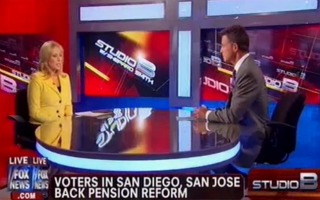 Smith asked Francis what she thought of the Dow Jones market rally, which at the time of his broadcast was up by 217 points for the day. “Personally, I don’t know why this is happening,” said Smith. “What is this?”

“Depends who you ask,” Francis replied. “I was talking to Lou Dobbs earlier and he was saying, you know, that this is a Walker rally. This is about people saying…”

“You’re rolling your eyes,” asked Francis. “You roll your eyes at Lou Dobbs? No one does that.”

Francis said that it is possible that the market is rallying behind Federal Reserve Bank Chairman Ben Bernanke saying that the government could inject more liquidity into the system with a third round of quantitative easing.