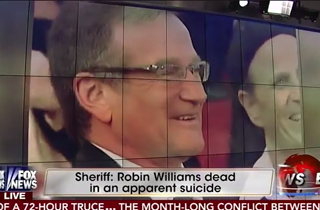 Last night, Fox News devoted some time to covering Robin Williams‘ apparent suicide, focusing on the comedian’s family life — and, in the middle of it, Shepard Smith described his death as “cowardly”:

It’s hard to imagine, isn’t it? You could love three little things so much, watch them grow, they’re in their mid-20s, and they’re inspiring you, and exciting you, and they fill you up with the kind of joy you could never have known.

And yet, something inside you is so horrible or you’re such a coward or whatever the reason that you decide that you have to end it. Robin Williams, at 63, did that today.

Shep Smith, who I am usually a big fan of, has apparently never been depressed http://t.co/nki3JJ4OO0

Shep Smith questioned whether Robin Williams was a "Coward"? NOOOOO! Ailes got to the only good guy there! GODDAMN IT! #EverybodySucksAtFox

@StanleyCohenLaw I could've done without Shep Smith of Faux News speculating on whether or not Robin Williams was a coward.

.@ShepNewsTeam couldn't wait till his body was in the ground before calling #RobinWilliams a coward http://t.co/5Yj59Hqp2U

Mediaite spoke to Smith on the phone, and he apologized for using the word “coward” and tried to clarify what he meant:

I spent an entire hour talking about how much this man affected people’s lives and brought greatness to this world. I was just wondering aloud what could have made this man want to end it all. And it reminds us that we all have responsibility as friends and neighbors to help take responsibility to prevent this from happening. There are people who process suicide as a black-and white-issue. I don’t process anything as black-and-white.

I was sorry to read online the people who see the world in a black-and-white way, and to suggest that they might have a definitive analysis of why he did such a thing. What I wanted to do is celebrate his life and find some meaning in our own lives, since we often do know someone who is reaching out, and we have a responsibility to help that person — maybe a phone call or a door knock is in order.

But no matter how you process it: Look at what this family is going through. I would never presume to know anything about his private life. And if any of his family members and friends were to have seen me use the word “coward,” I would be horrified. I would just to apologize to the end of the earth to anyone who might think that I meant to openly call him a coward.

To the core of my being, I regret it. It just came out of my mouth. And I’m so sorry. And to anyone and their families who see that, I am sorry.

Watch the original remark below, via Fox: