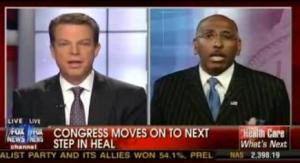 FNC’s Shepard Smith and RNC Chairman Michael Steele had a heated exchange today over the language being used by Steele and other GOP leaders to describe just how bad this health care bill actually is.

The major part of the disagreement stemmed from the use of the word “Armageddon” by Steele – but Shep also put Steele on the spot with his plan to fire Nancy Pelosi.

Smith asked Steele about David Frum‘s “Waterloo” column today, and Steele brought the conversation to firing Nancy Pelosi (a new website he touted several times). “This is my message: I’m asking Americans to join me across this country in firing Nancy Pelosi,” he said, to which Shep eventually interrupted: “I heard this talking point last night and I want to move forward.”

Tough question to answer, of course. “The people who want to be able to make those decisions without the government sitting between them and their doctor,” started Steele.

The conversation continued after the commercial break, with Shep sticking to his line of questioning calmly, but pointedly – and Steele stayed on message.