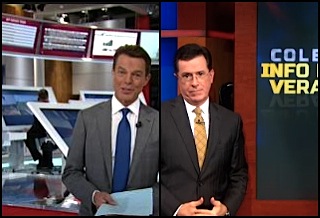 When trying to figure out why Fox News’ Shepard Smith does or says anything he does or says, Stephen Colbert thinks the best answer is “Because Shep.” On last night’s Colbert Report, the host took an in depth look at Shep’s new “Fox News Deck” and even presented his own version of the newsroom from the future: the “Colbert Info News Veranda.”

Colbert let Shep describe his new “Star-Shep Enterprise” before offering his own analogy. “It’s like Star Trek’s holodeck. It feels like you’re surrounded by news, but it’s all an illusion.” When Shep started using his fancy new controller to flip through stories on Fox’s giant screens, Colbert said, “It’s like he’s playing Wii Tragedy.”

The “Fox News Deck” was so inspiring to Colbert that he just had to create his own, slightly altered version for his studio. Instead of many giant iPads, Colbert had one enormous iPhone. While Shep has a 38-foot video wall for his news reports, Stephen has a 38-story video climbing wall, where former news producers, now called “information sherpas” scale the wall the bring you the latest stories.

Where Fox has “Big Area Touch Screens” or BATS, Colbert has “Big Unbelievably Large LED Super Hyper Information Technology or BULLSHIT. And things only got crazier from there, with a Dot Matrix printer, a “news falcon” and something called a “Tweet Bot” that uses a laser cannon to etch headlines directly onto the face of the moon.

Watch video below, in two parts, via Comedy Central: