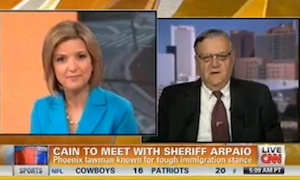 Maricopa Country Sheriff Joe Arpaio appeared on CNN’s American Morning, and spoke with Christine Roman about immigration and his planned meeting today with GOP frontrunner Herman Cain. Roman noted that Cain had told David Gregory that his suggestion that the US should electrify the border fence was a joke. “Oh, I’m sure he was joking,” Arpaio said. “But it probably means that he’s taking it serious to do something at the border and stop the illegal immigrations.”

Roman asked Arpaio why Republican primary candidates were blowing up his phone asking for endorsements.

“Well, it’s not because I’m tall, dark, and handsome, which I’m not,” Arpaio joked. “But I have been around twenty years, and many years as head of the Federal Drug Enforcement in Mexico, Texas, Arizona, so I think I know where the border is. That may be one reason, but I’ll meet with Mr. Cain. I met with Michele Bachmann in my office last month, and I’ll see how he stands on the illegal immigration problem.”

Roman asked Arpaio if he endorsed Cain’s view that we should enforce existing law and promote pathways to citizenship for illegal immigrants.

“Well, I’m against amnesty,” Arpaio said. “We do enforce the laws in the interior, we go into private businesses and lock up those employed illegally. Most for Social Security theft, so I believe in enforcing the laws in the interior and stop blaming the border and use that as a copout. So secure the border first, and then look at illegal immigration. It’s against the law, so we lock them up in Maricopa County for being here illegally.”