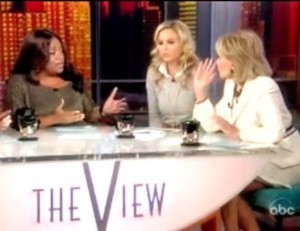 Sparks flew on the set of The View on Monday, as the topic of Herman Cain‘s uncensored use of the name “N*ggerhead” in denouncing Texas Gov. Rick Perry inspired one reaction when Whoopi Goldberg quoted him, and quite another when Barbara Walters did. Goldberg seemed to applaud Cain’s choice, and argue against the euphemistic use of “the n-word,” but when Walters quoted Cain (again, uncensored), co-host Sherri Shepherd told Walters, “”I didn’t like the way you said it.”

The exchange triggered an extended debate over the use of the n-word, with some familiar arguments being offered. There’s the “reclaiming the word” camp that seeks to deprive the word of its power through casual insider use, along with the (not mutually exclusive) argument that striking it, as with the censored version of Huckleberry Finn, blunts its hard-earned impact on our history and our culture. Both Shepherd and Goldberg agree, correctly, that the word carries a different connotation when spoken by a white person, than it does when a black person says it. What derailed the conversation, somewhat, was Shepherd telling Barbara Walters that she didn’t like the way she said it.

“It’s something about hearing you say it,” Shepherd replied. “I don’t like it when you use the word. When you say it it’s a different connotation.”

Later in the clip, Walters raised the issue of how journalists should deal with the word, asking, “If I’m reporting on this you mean i can’t use the word?”

Unfortunately, Walters and Shepherd appeared to be having different conversations, as Shepherd tried to convey the impact of any white person using that word, but Walters heard only that she had said it the wrong way. Clearly hurt and taken aback, Walters told Shepherd, “But I never knew you felt this way and I find it just amazing.”

The question of how journalists, and pundits, should deal with the word is a tricky one. There is no hard and fast rule. Generally speaking, I believe the uncensored use of the word should be avoided unless it’s necessary, which itself is a somewhat subjective standard. We have, thus far, used the censored version of the word in headlines and lead paragraphs, and used the uncensored name sparingly in the body of our posts. In a case such as this, I believe it is necessary to include the uncensored version somewhere in the reporting, for the sake of accuracy, and to compellingly convey the offensiveness of the name. The use of the term in our search tags, while uncomfortable, is necessary to give people access to the information in these stories.

Walters is on solid ground when she points out that she’s directly quoting Cain, but that doesn’t mean that veracity should coldly, dispassionately trump every other consideration. Shepherd’s reaction to Barbara’s use of the n-word, however defensible, is something that has been conditioned into black Americans for generations, in unimaginably cruel ways. The use of the word, even when directly quoting, should be reserved for times when it is essential to convey meaning, and even then, a negative reaction should still be expected, and understood.

Here’s the clip, from ABC’s The View: