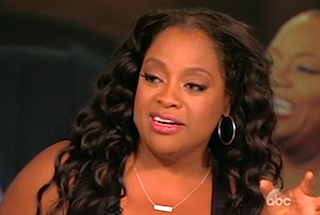 Chants of “Sherri! Sherri! Sherri!” could be heard at the top of The View Monday morning to mark the final appearance of host Sherri Shepherd, who last month announced she is leaving the show after seven years. In opening remarks that were equal parts funny and sentimental, Shepherd said goodbye to the show and explained what the experience meant to her.

“I’m so extremely and profoundly grateful,” Shepherd said. “This has been one of the most bet seven years of my life.” She told the audience and her fellow co-hosts that she initially did not want to take the job because she didn’t feel she was qualified.

“I was very painful, my growing experience, publicly to grow here and to learn,” she said. “I have to say my boss, Barbara Walters pushed me. I cried in my dressing room for three years, going ‘Why am I at this table? I don’t know what I’m doing.'”

As she has mentioned before, she got criticism from all sides with Bill O’Reilly calling her a “pinhead” and Bill Maher being perhaps even more cruel. But she kept pushing forward.

When another talk show host said a “potato sack” could replace Sherri Shepherd, Whoopi Goldberg burst into her dressing room and told her, “If Barbara didn’t think you could be here, she wouldn’t have asked you to be here.”

She added, “I’m so grateful for the group of friends and family that I have made and that have supported me and said, “It’s OK if you fall, get back up, come back, sit at this table and learn again.'”