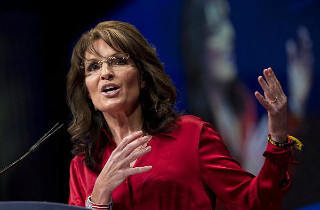 According to an official Fox press release, Palin will return to her role as a contributor to Fox News’ and Fox Business Network’s daytime and primetime programming. She will make her first return appearance on Fox & Friends next Monday, June 17th.

Regarding her return, Fox Chairman Roger Ailes said, “I’ve had several conversations with Governor Palin in the past few weeks about her rejoining FOX News as a contributor. I have great confidence in her and am pleased that she will once again add her commentary to our programming. I hope she continues to speak her mind.”

Palin’s statement: “The power of FOX News is unparalleled. The role of FOX News in the important debates in our world is indispensible. I am pleased and proud to be rejoining Roger Ailes and the great people at FOX.”

Back in January, Palin and Fox announced their split after a three-year partnership that began shortly after she resigned from her governorship in 2009. Her appearances on the network became so frequent and in-demand that the network built a studio inside her Alaska residence, with husband Todd Palin often acting as cameraman and producer for her satellite hits. Her contributions to Fox began to dwindle during the latter half of 2012, however, with Palin herself complaining on Facebook that the network had “cancelled all my scheduled interviews tonight” late in August.