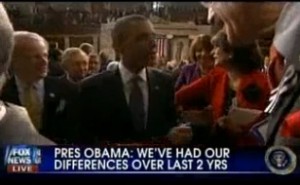 President Barack Obama delivered his third State of the Union speech tonight, and in an age in which opinion media so dominates political will, the reaction to the delivered text by various pundits is almost as interesting as the text itself. Take for example the initial reaction by the Fox News panel that seemed primarily unimpressed by what some may have seen as a significant move to the center by the Democratic president. Charles Krauthammer did not demure, calling the speech “flat and uninspired” and “remarkably against the trend of what the electorate said this November.”

To be fair, the energy in the room was dramatically different than recent State of the Union speeches, largely because the two parties were not sitting in clear and separate sections of the House. Without question, the somewhat improvised mixed seating arrangement that was conceived to show unity, took away many of the partisan interruptions but made for a more fractured and yes, entertaining experience. While it was perhaps less interesting to partisan bloggers looking for snark, it did create a rare and more unifying experience for the speech.

But this was largely overlooked by the Fox News panel, who focused on the actual rhetoric and ignored the “room,” at least in their initial reaction. Brit Hume seemed to agree with Krauthammer’s critique saying that it appeared that Obama “wanted the speech to be upbeat about America’s future, but only outlined further government spending.” When challenged by fellow guest Juan Williams, Hume doubled down by theoretically asking the President “How much borrowed money, Sir are you willing to spend on these items?” Sharp words that appear to have come from someone who may have missed (or overlooked?) any bipartisan effort from the President.

Kirsten Powers offered some historical context in defense of the speech by suggesting that State of the Union speeches are always known for “soaring oratory” and that this was no different. Williams went to bat for Obama, lauding the President for the realistic nature of the speech, clarifying that it was “not a time for fake oratory” adding admiration for the simple note that Obama made when he said “we do big things.”

Watch the video below, courtesy of Fox News.