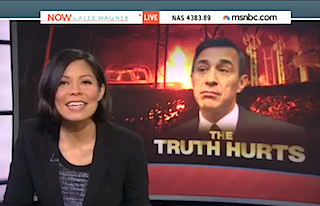 A report from the Republican-led House Intelligence Committee has reportedly found there was “no deliberate wrongdoing by the Obama administration” in the 2012 attack on the U.S. consulate in Benghazi. But, perhaps unsurprisingly, that development has not been major news across the cable networks since it first broke on Friday. In fact, it was not until the end of the 4 p.m. ET hour today that any one of the three major cable news networks even mentioned the content of the House report’s findings.

For the final segment of her MSNBC show Monday, Alex Wagner reported that “the latest news on the Benghazi scandal is that there is no Benghazi scandal.” She was referring to comments Rep. Mike Thompson (D-CA) gave to the San Francisco Chronicle last week, in which he said the unanimously-approved report “confirms that no one was deliberately misled, no military assets were withheld and no stand-down order was given.”

The host neglected to predict what these latest findings would mean for “Benghazi bloodhounds” Reps. Darrell Issa (R-CA) and Trey Gowdy (R-SC), who plan to continue using taxpayer money to investigate the Obama administration’s culpability in the attack and its aftermath.

The report got its second cable news mention two hours later on MSNBC’s PoliticsNation, during which Al Sharpton told his viewers that the new House committee report is “demolishing once again the right’s favorite myth about the terror attack in Benghazi.” After outlining the findings, as described by Rep. Thompson, Sharpton said, “This follows a slew of investigations over the past 18 months, all looking for smoking gun to implicate the president and his administration in a scandal that doesn’t exist.”

“You could look at this and say it just proves the conspiracy is broader than anybody thought,” Sharpton’s guest Dana Milbank said, facetiously, “because now even all of the House Republicans on the intelligence committee are part of the cover-up trying to protect this administration.” He predicted the report will “only fuel further the belief among Republicans out there in the grassroots that they are getting a raw deal.”

While MSNBC waited until Monday afternoon to report this story, it has received zero mentions on CNN, which has been wholly focused on the war in Gaza and a potential ebola virus outbreak. More tellingly, it has also been ignored by Fox News, which tends to lead the charge whenever there is a Benghazi-related piece of news that is damaging to President Barack Obama. The full report has not yet been declassified, so perhaps Fox is just waiting until they can thoroughly review all of the details rather than take the word of one Democratic congressman.

But that fact that no Republican members of the committee have gone on record disputing Rep. Thompson’s assessment indicates that he is not misrepresenting the content of the report. In that case, it appears that Fox is conveniently deciding not to talk about Benghazi when the latest developments on the story don’t fit their prevailing narrative that Obama is to blame.