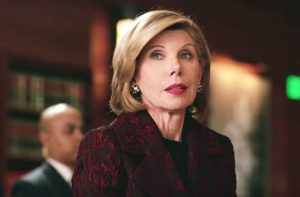 The Good Fight, an upcoming CBS spinoff of their hit show The Good Wife, had a few scenes that needed some adjusting after Donald Trump won the presidency.

Showrunners Robert and Michelle King sent Entertainment Weekly a copy of the first page of the pilot episode, in which they wrote down some notes about the real-world politics they incorporated into the show and how, well, some of that they wrote had to be altered:

“Like most pollsters, we thought Hillary would win the Presidency, so we wrote scenes about Diane retiring from the law because she ‘broke every glass ceiling.’ Obviously, we needed to rewrite — on the eighth day of shooting.”

Diane Lockhart, a main character on both The Good Wife and The Good Fight, is a strong liberal. And the script page reveals that the first episode of The Good Fight begins with Lockhart’s reaction to Trump’s inauguration.

The Kings write, “The show tends to be a satire of the liberal mindset. So it felt funny and awful to play off of Diane’s stunned reaction to the inauguration.”

Last month the Kings talked about how the spinoff will examine the nation’s cultural shifts:

“With Trump and the cultural shifts we’re seeing we’re really excited — there’s a strong rationale for the show,” Robert King said during a Q&A at the Scripted television conference in New York…

The series will explore the climate change in the country, not just the political upheaval that Trump represents but the fact that the country is “possibly accepting of a cruder culture,” Robert King said.

The Good Fight debuts on CBS All Access on February 19th.