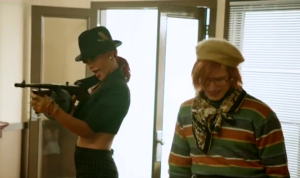 Rihanna is so damn hot. Andy Samberg‘s “Shy Ronnie” is so damn not. Which is just one of the fun juxtapositions set up by the second installment of the getting-close-to-being-pretty-damn-iconic “Shy Ronnie” SNL digital short. Another fun juxtaposition: When in a duet you expect to hear the second person sing and they mumble in a barely-audible whisper. The latter is basically the conceit of the “Shy Ronnie” series, but of course the juxtaposition of the former works too, because of the ridiculousness of how Rihanna would end up with Shy Ronnie in the first place (the first one was singing to classroom of schoolkids.) This one riffs on “Bonnie & Clyde,” gender-bending to give Rihanna the fedora’d male role, complete with giant phallic gun, and Ronnie dressed Faye Dunaway-style with an adorable little pistol (hilariously called out in the short). But while the first Shy Ronnie was awesome for just the weirdness of it’s briliant setup (one of my fav shorts ever – for reals) this one upped the ante by not only making me laugh out loud but also, the song was pretty awesome and catchy and I sorta wish it were real (“Count the money sloo-oow, sloo-ow” was pretty great). Also this short really used the ensemble supporting cast well – it’s one of those sketches where you realize that facial expressions on supporting characters buttress the whole in real, active ways (and if you doubt what a good actor Jon Hamm is, consider how much value he contributed with a second and a half of screen time, where his face told the story simply, comedically and incredibly expertly. The dude is a good frigging actor). Also, wow is Rihanna hot. Also can you tell I really liked this sketch? I probably shouldn’t have ruined it for you wonkily before you had a chance to see it. Well, too late now. Watch below: