Sign Of The Conservative Times: Bill O’Reilly Doesn’t Know Who John Galt Is 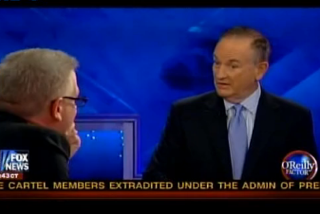 The weekly segments Bill O’Reilly shares with Glenn Beck on his program often serve to highlight both a generational shift and an ideological one among the American right– between young and old, conservative and libertarian. And while last Friday’s chat had almost nothing to do with politics, O’Reilly’s reaction to one of Beck’s non-sequiturs proved particularly definitive of the schism Republicans will have to mend to win in 2012: O’Reilly didn’t recognize the name John Galt.

The context for the Ayn Rand hero arising definitely gives O’Reilly some leeway– O’Reilly had forced Beck to give an opinion on the royal wedding, of which he adamantly refused to care. Instead, he wondered why O’Reilly had not watched “that John Galt movie”– the film remake of Atlas Shrugged— leaving O’Reilly somewhat confused until he named the film. “You’re taking it back to that Ayn Rand stuff?” he asked, mispronouncing the Russian author’s name. Clearly, for the most prominent name on the most prominent conservative medium in the nation, the much-beloved author among libertarians means little, and the little her work does mean he dismisses handily (in exchange for the royal wedding and Scream 4, to add insult to injury).

This likely has as much to do with demographics as it does with personal interest– O’Reilly, while self-identifying as independent, has more often than not fallen on the conservative side of issues, particularly with regard to social issues. And his following tends to skew in the same direction– somewhat more socially authoritarian than Beck’s audience, or John Stossel‘s, or Judge Andrew Napolitano‘s, et al– for whom all Atlas Shrugged is considered required reading.

Beck has hinted that this audience as it exists for the entirety of Fox News was a factor in his transition away from the network, even as Beck is not even completely in lockstep with the principles the average Atlas Shrugged-reading, Stossel-watching libertarian holds (for one, he opposes the legalization of controlled substances). It skews younger and perhaps more idealistic, and, as it translates to 2012 prospects, tend to be the kids wearing Rep. Ron Paul t-shirts or getting somewhat nervous at the idea of choosing between Paul and former New Mexico governor Gary Johnson. Contrast this with the Mitt Romney/Sarah Palin crowd, who overlap on economic principles but much less zealously so, and may just appreciate that O’Reilly doesn’t know anything about that Galt person the youngsters nowadays are going gaga over. With the only currently existing unifying factor among potential Republican candidates being absurdity, the squabble between the two hosts serves as a microcosm of the differences the right must publicly overcome when confronted against a united Democratic Party. And as long as one side disparages the text of one side as teeny-bopper fantasy while the other secretly suspects their elders are the enemy, the Republicans have their work cut out for them.

The Atlas Shrugged chatter via Fox News below: