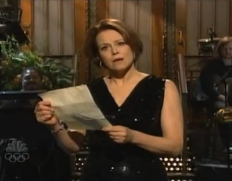 Sigourney Weaver is hosting tonight’s installment of Saturday Night Live, and her monologue contained references to Avatar, Alien — and her dad, Pat Weaver, who was president of NBC between 1953 and 1955. The elder Weaver created the Today show….and also, the Tonight Show.

Hold that thought for a moment.

Well, there are a few ways to do so but I’m going to focus on this one: Sigourney’s dad may have put some specific, identifiable parameters on the timeframe for the Tonight Show. Weaver read aloud from the memo her father wrote conceiving of the show, like so:

My father wrote, that the Tonight Show should be, quote, “a light entertainment program with comedy and interviews to air at night, before people drift off to sleep. Because the last thing anyone wants at that time of night is any conflict or controversy.

Emphasis added. So the question becomes, at what time do people generally drift off to sleep? And what timeslot occupies the time immediately “before” that? In the case of the broad audience expected (and demanded) for the Tonight Show, I think it’s clear that Weaver was contemplating a pre-midnight timeslot. I have done no research on American sleep patterns through the ages. But, looking at the bigger picture, Weaver’s description is consistent with an end-of-night show that literally occurs at the end of the night, as specified — not the next morning.

This is borne out by history: While the Tonight Show has extended in either direction in the past, it has for the most part been constant (from 1957 – 1966 it ran from 11:15 – 1 p.m. — starting earlier and ending later). Conclusive? Again, this information serves the larger picture: this is the time of the Tonight Show (so part of the whole that the start time isn’t even mentioned in the Museum of Broadcast Communications writeup). So: While Weaver did not make the start time explicit in his memo, he did describe the start time — “as people are drifting off to sleep” — and then proceeded to define it by scheduling his show at 11:30 p.m.

This is not to say that the Tonight Show did not evolve and mature over its long history — that it did. But for a show that started in 1954, it’s been remarkably consistent. And if anything, that 11:30 p.m. start time has entrenched around the Tonight Show, thanks to its main competition.

So: Does this prove Conan’s case against NBC, and conclusively show that they are breaching their contract by seeking to remove him from the Tonight Show before the two years stipulated in his contract? No. But it is one piece of the larger puzzle that addresses the question of what constitutes the essence of the Tonight Show. Conan needs to show that such essence includes that pre-midnight start. This helps.