Sikh Professor Brutally Attacked by Crowd in Apparent Hate Crime: ‘Get Him, Osama!’ 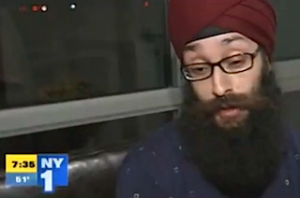 An associate professor of international and public affairs at Columbia University had to undergo surgery on his jaw Saturday night after allegedly being attacked by 25-30 teenage boys while he was walking near the school’s campus in upper Manhattan. Prabhjot Singh told the New York Daily News that the attackers called him “Osama” and “terrorist” as they chased him down and beat him.

“There was a group of 25 to 30 young men,” Singh, who suffered a fractured jaw said. “One of them said, ‘Get him, Osama.’ I got punched directly in the face about three times.” He said he was only saved when a good Samaritan walked by and helped break up the attackers.

“It’s incredibly sad,” Singh said. “It’s not the neighborhood I know. I work in this community. It’s just not American.” He added, “It’s important that they are caught and be held responsible for what they did.”

Singh previously co-authored an op-ed for The New York Times titled “How Hate Gets Counted” following the August 2012 mass shooting at a Sikh temple in Milwaukee, Wisconsin by white supremacist Wade M. Page. In the piece, he wrote about the issue of “mistaken identity” in attacks on Sikhs:

There are two disturbing aspects of the response to the shooting that deserve wider public attention.

First is the notion of “mistaken identity” — the assumption that Mr. Page, who had long-established ties to radical right-wing groups, mistook Sikhs for Muslims, his presumed target. The second is the government’s failure to accurately measure the extent of anti-Sikh violence in America — a gap that must be remedied.

Whatever the roots of Mr. Page’s hatred, it is wrong to assume that every attack against a Sikh is really meant for a Muslim. That assumption overlooks the long history of discrimination and hatred directed at Sikhs in America.

Given the language allegedly used by Singh’s attackers Saturday night, there seems to be little doubt that they mistook the Sikh for Muslim.

Watch video below, via NY1: