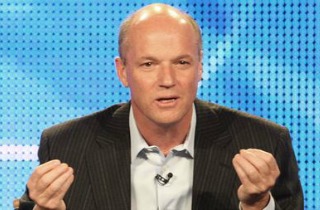 Maybe conservatives aren’t entirely alone in being unable to accept inconvenient realities reelected in surveys. According to a report in Media Bistro on Friday, MSNBC President Phil Griffin demanded an “investigation” be conducted into Fox News Channel’s “impossible” ratings increase over the last week. He did not specify which agency would conduct this investigation, but might we suggest the Federal Bureau of Embarrassing Statements?

“Monday we had a really good day in the key demographic, on the night that Fox News debuted their three shows, we either tied or beat them in those hours,” Griffin told a group of MSNBC employees at a briefing to preview the launch of a redesigned MSNBC.com.

“Tuesday – you guys should be doing some investigations – I have never seen it in all my years of cable, same overnight, same everything, and they doubled their ratings in a day? It is impossible,” Griffin continued inadvisably. “I have never seen it. They did election night numbers in the demo Tuesday.”

Griffin is correct. After a lackluster debut on Monday night for Megyn Kelly’s The Kelly File, her ratings increased in the key demographic by %116 percent to 635,000. “Kelly also saw a 34% increase in total viewers, rising to 2.768M,” Mediaite reported. “Fox News soundly beat its competition on CNN and MSNBC in both the 25-54 demo and total viewers.”

Impressive, yes. No one has yet, however, suggested that this ratings increase was… suspicious.

The Hollywood Reporter reached out to Nielsen for comment, but as of print time they had “not yet responded to Griffin’s remarks.”