Slain Libya Diplomat’s Mother: ‘My Son Is Not Very Optimal – He Is Also Very Dead’
video

Slain Libya Diplomat’s Mother: ‘My Son Is Not Very Optimal – He Is Also Very Dead’ 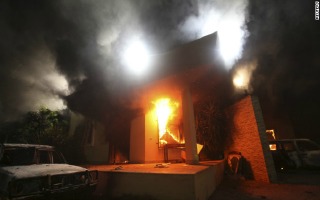 Pat Smith, the mother of one of four Americans who lost their lives in the September 11 attack on the American consulate in Benghazi, spoke to the U.K. Daily Mail about a comment made by President Barack Obama during his appearance on Comedy Central’s The Daily Show on Thursday. “If four Americans get killed, it’s not optimal,” President Obama said to host Jon Stewart. “My son is not very optimal,” Smith told the Daily Mail. “He is also very dead.”

During the interview with Comedy Central’s The Daily Show host, Obama made his “optimal” comment after Stewart noted that the conditions American diplomats faced in Libya leading up the fatal attack were not “optimal.”

Some have called Obama’s characterization of the attack callous. The Daily Mail notes that Smith, the mother of slain diplomat Sean Smith, is among those who found Obama’s comments to be insensitive.

Speaking from her home in San Diego, Mrs. Smith, 72, continued: ‘It’s insensitive to say my son is not very optimal – he is also very dead. I’ve not been “optimal” since he died and the past few weeks have been pure hell.

‘I am still waiting for the truth to come out and I still want to know the truth. I’m finally starting to get some answers but I won’t give up.

‘There’s a lot of stupid things that have been said about my son and what happened and this is another one of them.’

Read the full report via The Daily Mail