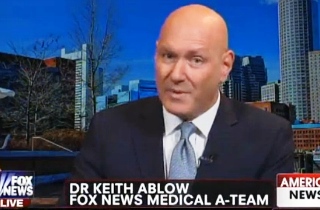 It should be clear by now that Fox “psychiatric expert” Keith Ablow just likes to hear himself speak. There can be no other explanation for why he so regularly appears on Fox with the most predictably quacky theories about news stories he really has no place commenting on.

When he’s not opining that President Obama is taking out his “grandma issues” on America, Ablow is smirking his way through a segment skirting ever-so-gently on blaming the victim in Monday afternoon’s Florida movie theater shooting.

During a screening of Lone Survivor, retired police officer Curtis Reeves, 72, shot and killed 43-year-old father Chad Oulson for texting during the film previews. The pair had been arguing about the father’s cell phone use, and the retired cop reportedly left the theater and returned in a very agitated state. He eventually pulled out his handgun and killed Oulson after he’d allegedly thrown popcorn at the ex-cop.

Seems pretty clear that, in pulling out his handgun and firing into Oulson’s chest, Reeves elevated this conflict to a level of senseless violence, killing a man in the process. Not sure how Ablow could spin this into some rant about texting or kids and their damn machines…

We have to look at something I’ll call “data rage,” just like “road rage.” We know that when people interact with machines, that sometimes they feel emboldened to do things that they never would; that it could be tremendously frustrating; and that people who could be vulnerable — by the way, they may impulsive to begin with, they may be explosive — add in technology or a machine and things could go over-the-top and become very violent.

Fox host Alisyn Camerota noted that it sounded like Ablow was blaming the victim here. Of course, he denied the allegation and added this beautifully trite little nugget:

In understanding it, we’ve got the say, “Wow, there was a machine involved.” Now, we also know that in road rage, there’s a car involved. People seem to be dehumanized by the presence of this car, and the fact that they can’t then connect to the individual. So if what’s happening here… where because someone’s interacting with the machine and, therefore, removed from any interpersonal moment here where there are other people around, and you want to be sensitive, somebody else becomes unhinged. In interacting with these machines, people do things they would never do. And not necessarily the guy pressing the button. It could be the guy two rows back who thinks of you as not human.

Okay, got that? So, according to super genius Dr. Ablow, Oulson may be slightly at fault here for his own death because he was interacting with a machine and, in doing so, became less sensitive to the needs of others around him and, thus, became less-than-human to his assailant. This all led to the ex-cop becoming unhinged… because of machines and data rage and WHAT THE HELL IS THIS?!?!

Make it stop. Please. Someone.