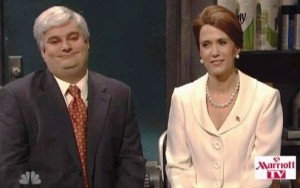 Lucky us — Marriott TV brought us “yet another GOP debate,” live from “Conference Room 5 in the Cedar Falls Marriott.”

Herman Cain, Mitt Romney, Rick Perry, Michele Bachmann, Newt Gringrich, Ron Paul and Rick Santorum all participated in this debate. They were arranged according to polling numbers, so Bachmann and Gingrich were live from a broom closet in the hotel, Ron Paul was hanging out in the parking garage, and Rick Santorum was cooling his heels at a gay bar in the Castro District of San Francisco. Rick Perry, Mitt Romney and current frontrunner Herman Cain had the honor of actually being in the room, though Perry had to face the wall.

Mitt Romney, when asked why Republican voters had failed to embrace him, acknowledged that “before going home with Mitt Romney, [voters] are going to take one last lap around the bar to see if there’s anyone better than me, and I’m okay with that.” Herman Cain acknowledged that his 9-9-9 tax plan was cooked up when he still didn’t think anyone was going to take him seriously. He was hoping to get a show on FOX News at 9, you see. Perry acknowledged that his strategy was to play “the Mormon card,” “the race card,” and if all else failed, frame Romney for murder in Texas and then electrocute him!

The candidates who weren’t lucky enough to be given seats in the studio were spared any real questions, though Bachmann and Gingrich were given the opportunity to fight each other for the opportunity to escape the broom closet, a proposition Bachmann eagerly accepted. Santorum remained traumatized and alone in the bar, while Ron Paul resisted kidnapping in the parking garage and I think murdered a few people?