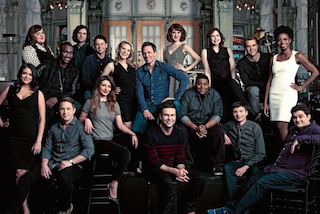 Yesterday, Brooks Wheelan revealed on Twitter that he had been let go from the cast of Saturday Night Live. Today, we learn who else has been cut before the show enters its landmark 40th season on NBC.

According to Deadline, the contracts for Noël Wells and John Milhiser, two other cast members who joined the show as featured players at the beginning of last year, have not been renewed.

In addition to those three departures, discussions are reportedly ongoing surrounding Mike O’Brien, who transitioned from the role of writer to featured player last year and could be going back to the writing staff. Nasim Pedrad, who has been on the show for the past five seasons, is expected to leave as well in order to star in former SNL writer John Mulaney‘s new primetime series on Fox.

This latest news probably spells relief for Beck Bennett and Kyle Mooney, two other rookies last year who could have seen their fortunes cut short. Sasheer Zamata, who joined the show mid-season and was giving far more to do than any of the other newbies, was in a far safer position, especially given the controversy that preceded her hiring.

With Wells and Pedrad gone, SNL now has only five female cast members going into next season (compared to eight men), so we can probably expect at least one more woman, if not more, to join the cast before September’s premiere.

As for Wells and Milhiser, ultimately neither performer broke through in a big enough way to remain essential going forward. Though Wells’ Nancy Grace impression will be missed.