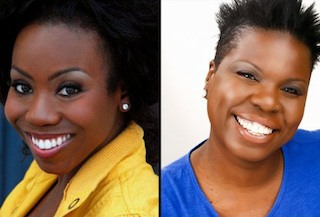 In addition to adding Sasheer Zamata to the cast as a featured player when the show returns on January 18th, Saturday Night Live has also hired two new African-American female comedians to join the writing staff. The Hollywood Reporter confirms that LaKendra Tookes and Leslie Jones, who were discovered during a recent round of auditions, will join the show’s writers’ room starting Monday.

Tookes is a former news reporter who has performed at the iO West theater in Los Angeles. Jones, also from LA, is a stand-up comedian who has appeared on television in shows like The League and Sullivan & Son. Both women have performing backgrounds, so while there are “currently no plans to have either appear on-screen,” it would not be surprising if they end up making appearances down the line or get added as featured players at a later date. Jason Sudeikis, who recently left the show, started as a writer before joining the cast.

The addition of Tookes and Jones to the writers’ room can be seen as further attempts by the show to address diversity problems raised by cast members Jay Pharoah and Kenan Thompson over the last year. The issue was brought into focus on the show when Kerry Washington hosted last fall and had to portray both Michelle Obama and Oprah Winfrey in the opening sketch.

And watch Jones do stand-up at The Laugh Factory below: