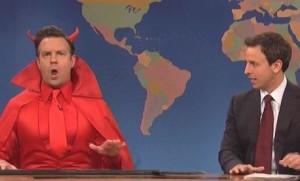 SNL’s Weekend Update had the devil himself on to comment on the Penn State sex abuse scandal. The only trouble was that the devil didn’t know what all the fuss was about, and thought he was there to talk about a recruiting issue. Seth Meyers had to give him a brief whispered summary, upon which the devil exclaimed “I may be a prince of darkness, but I’m not a monster!” The difficult realizations weren’t over, however. He expressed dismay that Joe Paterno had to deal with such a creep on his staff, and Meyers had to explain Paterno’s role in the cover-up as well. The devil couldn’t believe that students were still protesting his firing, and warned them to stop it since pictures of said protests will live on the internet forever…which is why he invented it.

Wait, the devil invented the internet? It turns out he just came up with a few key parts — the comments section, tagging on Facebook, buffering, and terms of service agreements. Now we all have someone to blame! “Evil isn’t what it used to be,” the devil sighed, breaking his pitchfork in half. Before he left he told Seth he’d probably have to go back to his old job, which was working in the customer service department at Time Warner Cable. I don’t usually love the devil sketches, but between calling out Penn State student protestors for their abhorrent behavior and slamming the cable company I have to deal with on a regular basis, I was on board for this one!

Watch it via NBC below: