SNL’s Newest Hire: ‘I Don’t Even Know What Race I Am’ 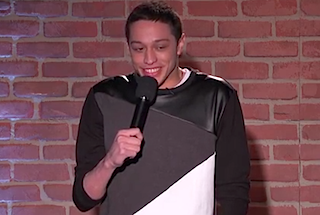 Over the past couple of years, Saturday Night Live has found itself under fire when it comes to the diversity of its cast. After much pressure last year, the show hired Sasheer Zamata, the first black female cast member to be featured since Maya Rupdolph left in 2007 and only the fourth in the show’s history. Then, just this past week, SNL added former writer (and Daily Show correspondent) Michael Che as the show’s first black co-anchor of Weekend Update.

And now, on Monday, Deadline is reporting that SNL has added one more featured player to this season’s line-up: 20-year-old stand-up comic Pete Davidson. A representative for the show confirmed that Davidson was Lorne Michaels’ sole featured player pick for the new season, with no more cast hires to be announced before the September 27 premiere with Chris Pratt as host.

But what race is Davidson? And more importantly, should it matter?

Back in April, Davidson did a rare televised stand-up set on Jimmy Kimmel Live, in which he introduced himself to world like this:

Davidson’s racial ambiguity should serve him well at SNL. Like Fred Armisen, who played everyone from Barack Obama to Muammar al-Gaddafi to Barney Frank, the new featured player will likely be called on to portray a wide variety of types. And without any other new cast members starting with him, he will have no choice but to stand out.