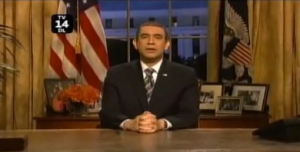 There’s been much consternation among Democrats about the way President Obama‘s proposed tax package cowtows to Republican demands. But Fred Armisen‘s Obama has a perfectly good explanation as to what happened. “This White House had no choice,” he said. Republican leaders, you see, had held Team Obama hostage—literally. And it was then—while “bound, gagged, blindfolded in a dark room” on the outskirts of D.C.—that he had seen the error in his ways.

After being held hostage for three days, the effects of Stockholm syndrome took hold, he says. By the fourth day, it was too late. At that point, the conversion was complete and he could finally see that “the tax cuts for the wealthy aren’t a big problem. They’re the best part of the bill!”

He assured us that the rich would use the money to create jobs, “millions and millions of jobs.” After all, Rush Limbaugh himself said he’d “never been hired by a poor person.” Who doesn’t trust Rush Limbaugh?

He even offered his “outrage at the unjust treatment” of Bristol Palin, and, on behalf of Mama Grizzlies everywhere, voiced his condemnation of the Dancing With The Stars‘ panel of judges. Perhaps that’s when you know you’re really a Republican politician—when you’ll do anything to not upset the likes of Sarah Palin.

While turning this new leaf, Obama also learned more about himself. For instance, he’s beginning to “have his doubts” on whether he’s a natural-born American citizen. Yes, that’s right—Obama’s now a birther.

So what do you think of Obama’s newfangled identity (crisis)? If you approve, you should book a ticket to Tampa Bay, where the he’ll be joining Glenn Beck and Bill O’Reilly for their Gold Fresh Tour. Until then, you can watch the Saturday Night Live skit in the NBC clip below.