Snowden’s Father In Talk With Fox’s Bolling: ‘Would Rather My Son Be A Prisoner’ Here Than ‘Free Man’ On The Run 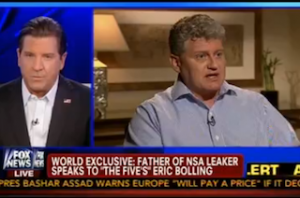 Eric Bolling teased his exclusive interview with Edward Snowden‘s father Lonnie Snowden on this morning Fox and Friends. This afternoon on The Five, Bolling presented his full interview with the NSA leaker’s father, at one point asking the man to speak directly and frankly into the camera to his son.

Lonnie Snowden told Bolling that he hasn’t seen or spoken to his son since early April, calling Edward a “sensitive, caring young man” who “knows the difference between what is just and unjust and right and wrong.” He described how difficult it has been to go from thinking his son was missing to discovering he was the one responsible for leaking NSA secrets.

Snowden said he couldn’t have done what his son did, but at the same time he said, “I don’t know what he has seen, what he has been exposed to.” He did express some of very same concerns that his son has expressed when explaining why he chose to blow the whistle.

At Bolling’s request, Snowden looked directly into the camera and spoke to his son, saying, “we’re certainly saddened by your decision, but it has not diminished our love for you.” He added, “I hope, I pray, and I ask that you will not release any secrets that could constitute treason.”

Later in the show, Bolling played one more part of his interview with the elder Snowden, asking if he wants his son to return to the United States, even if that meant he would go to prison. “I would rather my son be a prisoner in the U.S.,” Snowden said, “than a free man in a country that did not have, again the freedoms that are protected that we have. You know, the U.S. constitution and the Bill of Rights, that’s what defines us, that’s what makes America, America.”

Bolling has been outspokenly sympathetic towards Edward Snowden and critical of the Obama administration for its support of the NSA surveillance programs over the last couple of weeks, which may have helped him land this exclusive sit-down with Lonnie Snowden. In his introduction to the interview, Bolling said Snowden “reached out to someone in D.C. that he trusted, and that person happens to trust me.”