So Now, It Turns Out Ben Carson Apprehended a Carjacker
video

So Now, It Turns Out Ben Carson Apprehended a Carjacker 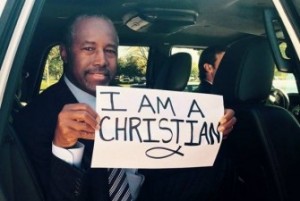 Just when you thought The Adventures of Dr. Ben Carson, Knife-Fighting Gunman-Rushing Man of Mystery was over, a new chapter is born. The retired neurosurgeon has already regaled the public with several different versions of the time he stabbed a guy, the time he cut a dude’s head with a padlock, went after his moms with a hammer, faced down a gunman at a Popeye’s organization, was saved from a car crash by God, was personally tutored by an angel, rescued white people from rioting blacks, and hypothetically rushed a mass shooter, but those incredible tales are nothing compared to the latest Carson exploit to be revealed.

Apparently, Dr. Ben Carson was once the victim of a carjacking, but managed to chase down the perpetrator(s?) on foot, then befriend him on the basis of his fame as a world-renowned surgeon. Lest you think I’m even slightly shitting you, here’s how  Candy Carson, who has just released her new book A Doctor in the House (which was “written in only four weeks”), recounted the tale on Tuesday morning’s Fox and Friends:

Steve Doocy: We think we know Ben Carson. But we don’t. For instance, tell us about the time where you were being carjacked, and what happened?

Candy Carson: I don’t think… You talking about when he got carjacked? No, he was on his way home from work. so I was with the kids. Yes, he drove into one of the gas stations that was near work, and it wasn’t the greatest neighborhood, but went in to pay and it was his baby, the Jaguar. So when he came out, he noticed that the car was starting to drive off.

Candy Carson: No! So he chased it. and you know, caught up, and when the guys, they got out of the car, they put it in park. They said “Wait a minute, are you that doctor?” They were shaking hands, taking pictures.

Kilmeade: So that’s it?

Doocy: I want a picture with the carjacker.

Kilmeade: I’ll take the Pacer next to you.

And that carjacker turned out to be Barack Obama!

Now, I know what you’re thinking, if he wasn’t in the car then it’s not a carjacking, and how could a man outrun a Jaguar, and once he outran it, how would he compel desperate criminals to park the vehicle, but that’s just liberal media bias. I know, it’s weird that he’s never mixed this story in with the Holocaust jokes at the zillions of speeches he gives, but do you really expect Ben Carson to remember every encounter with criminals?