‘So Now We’ve Migrated from Racist to Child Molester!’: Fox Panel Goes Off the Rails 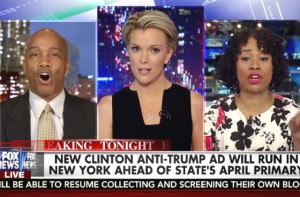 In the span of one Fox News segment tonight, both of Megyn Kelly‘s guests managed to get in a big fight that invoked the KKK, Planned Parenthood, child molestation, Confederate/Nazi symbology, and rapist Catholic priests.

You know, the usual.

Lisa Durden started out by calling Trump a “violent sexist racist” who’s too “trigger-happy.” Kevin Jackson dismissed the racism charge against Trump by pointing out that the late Robert Byrd was a Democrat and used to be in the KKK and Hillary Clinton praised him.

Kelly pushed back on his framing of his record on that matter, and he went on to bring up how the woman who led to the creation of Planned Parenthood was not only an idol of Clinton’s, but she called black people “human weeds.”

An outraged Durden likened that to someone being called a child molester for the rest of their lives, and Jackson remarked, “So now we’ve migrated from racist to child molester!” They fought and Durden shouted, “Let Megyn Kelly ask me the questions, not you!”

Kelly tried to move on to a touching moment with Trump’s genuinely emotional and moving moment with the former Miss Wisconsin. Instead of talking about that, Jackson was more interested in tearing into people who think Trump’s a racist.

Durden ripped into Trump for profiling and asked why not profile “Catholic priests and all the Catholics because priests are raping children!”