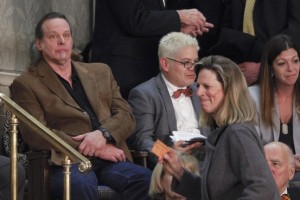 Today might just be my proudest day as a cable news consumer. Despite Politico editor Jim VandeHei‘s prediction that “cable TV is not going to be able to resist the incendiary things that Ted Nugent” would say after Tuesday night’s State of the Union Address, the cable news networks have, so far, maintained a near-blockade on Nugent clips, and according to Bill Press, wasn’t featured in any of the crowd shots from the speech. The only exceptions, so far, have been CNN and MSNBC, who each aired Nugent snippets during the 5 am hour Wednesday morning, one of which, naturally, contained the word “fecal.”

It wasn’t as if Nugent didn’t make himself available, either. Politico (Oh no! They couldn’t resist either!!) reported that Nugent held court with reporters, telling them that Rep. Jim Langevin (D-RI), who was paralyzed in a shooting accident, had “Shit for brains” because he was critical of Nugent’s attendance at the address. He also denied threatening President Obama.

NBC News’ Luke Russert later asked Nugent if he thought that was “an appropriate thing to say about a sitting member of Congress who’s in a wheelchair?”

Nugent, no stranger to feces, responded that it would take “genuine fecal material instead of brain matter” to suggest that he doesn’t “feel sorry for the victims of violent crime.”

Nugent demonstrated his sensitivity for victims of gun violence when, in the hours after twenty children were gunned down at Sandy Hook Elementary School, he tweeted “Our family is phenomenal loving we take our kids huntin so we dont hafta hunt for our kids.”

CNN’s Jim Acosta also caught up with Nugent, who told Acosta that he wasn’t packing, but was apparently carrying  loaded thesaurus. He told Acosta that his message was “Freedom. Freedom and independence. Rugged individualism, and leave us alone.”

For the most part, cable news laudably appears willing to do just that. Here are the two exceptions, from CNN and MSNBC, each of which aired shortly after five o’clock this morning:

Nugent did, to his minimal credit, manage to keep his yap shut during the speech, and also took off his stupid camouflage hat. Either that, or that’s some really good camouflage.