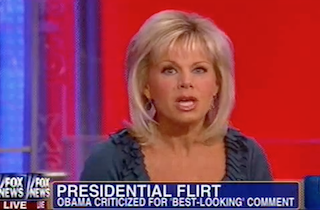 The first lady isn’t the only member of her family with a viral soundbite this morning. Yesterday, President Obama caused a stir when he referred to Kamala Harris as “the best-looking attorney general” — a remark many have found inappropriate. Obama found unexpected allies on Fox & Friends, however, as the show’s hosts found the comment more accurate than offensive, asking simply, “So what?”

“You have to be careful to, first of all, say she is brilliant and she is dedicated and she is tough, and she is exactly what you’d want in anybody who is administering the law, and making sure that everybody is getting a fair shake. She also happens to be by far the best-looking attorney general in the country — Kamala Harris is here,” Obama said at a fundraiser (per ABC News), adding, “It’s true! C’mon.”

Gretchen Carlson lamented that “you can’t say anything anymore” — adding, “She is, she’s pretty! So what?” Attorney General Eric Holder is the one who should be upset, Steve Doocy quipped.

As the crew moved on to discuss how the president’s administration has been criticized for being a men’s club, Carlson argued that many businesses are that way. “If you want to talk about the pervasiveness of women not in top positions, then that’s a whole discussion about society and banks and different lines of business, et cetera,” she stressed. “But I don’t think people should be totally offended by saying — if a nice-looking man walks down the street, I’ll say, ‘Wow, a good-lookin’ guy.'” (Naturally prompting Brian Kilmeade to add, “But you won’t grab his butt.”)

Kilmeade, who incidentally said he recently got out of sexual harassment training, agreed with Carlson. “When you see an attractive woman who happens to be very professional and smart, wouldn’t it be great to include she is very attractive in the rundown of attributes?” It’s not exactly a quality to list on a resumé, Carlson clarified, but there shouldn’t be an issue with simply acknowledging it.

She further went on to deem the discussion a lose-lose situation for women because being offended makes a woman too sensitive, while not being offended means she’s not standing up for women’s rights. There’s no reason to be so politically correct: Harris is attractive, and saying so isn’t a big deal.

Kilmeade asked whether women are upset by men pointing out they’re attractive — “it just so happens he’s a man who happens to be president and married.”

What say you, readers? Offensive or accurate?