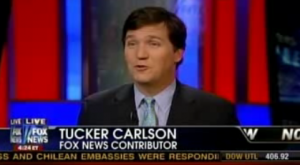 In 2010, the Diversity Committee of the Society of Professional Journalists (SPJ) began a quest to get American journalists to stop using the terms “illegal aliens” or “illegal immigrants” and instead use “undocumented immigrant.” This ruffled some feathers with Tucker Carlson who headed over to Fox News to debate the issue over grounds of free speech and journalistic integrity. Mostly though, he just wanted to know who the heck the SPJ was.

“Let me just say, I’ve been a journalist my whole life, my dad was a journalist. I’ve never met anybody who belonged to the Society of Professional Journalists, whatever that is. So let’s just make it clear to viewers who may not have perspective on this, they are not a major force within the world of journalism.”

Carlson’s being slightly disingenuous here. In fact, over at Carlson’s website, The Daily Caller, Matthew Boyle pointed out that “many journalists nationwide follow” the SPJ’s code of ethics so, at the very least, some of his employees have certainly heard of the organization. Still, once he made sure to explain why Fox News’ viewers shouldn’t listen to a word the SPJ has to say, his actual arguments against the appeal were a lot stronger.

“Is the status legal or illegal? If it can be proved that they are here illegally, then it is within bounds to describe them that way. And it is politically loaded, again by definition, to insist that reporters not call them that.”

Of course, that’s where the SPJ would probably use his own argument against him. It can’t be proven that they’re here illegally. At least, not by a reporter.

From Quill, the official magazine of the SPJ:

One of the most basic of our constitutional rights is that everyone (including non-citizens) is innocent of any crime until proven guilty in a court of law. That’s guaranteed under the Fifth, Sixth and 14th Amendments of the Constitution, as I learned during four-year post-doctoral studies in appellate law at the California Court of Appeal in San Diego.

Simply put, only a judge, not a journalist, can say that someone is an illegal.

While the earlier argument in that quoted piece about the terms being offensive to Latinos is rather silly (can no one from, say, France ever come here illegally?), this argument actually holds some ground. It is interesting that in the Fox News segment, neither Carlson nor Brian Sullivan mention this part of the debate, sticking only to the more easily debunked political correctness angle. They also imply that the Committee was asking for “undocumented worker” to be the term rather than “undocumented immigrant.”

Whatever the case, everyone involved will point out that, at this point, the Associated Press still identifies “illegal immigrant” as the proper term.