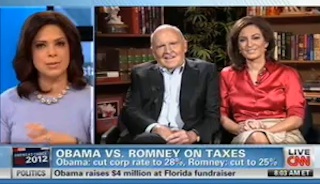 “There was lots of uproar about GE’s tax bill,” O’Brien observed. “The company, GE, reported worldwide profits of $14.2 billion and said $5.1 billion of the total came from its operations in the US. Its American tax bill, none. GE claimed a tax benefit of $3.2 billion. So I think it’s hard for people who are not, you know, tax attorneys to understand how a major company can make $5.1 billion here in the United States, and then get a really large tax benefit at the end of the day. Can you explain that?”

Welch didn’t seem to have an answer prepared for O’Brien’s politically-loaded question.

“But I can tell you this,” he continued. “I retired ten years ago but from what I know; General Electric’s tax bill was impacted dramatically by the heavy losses it took in the financial sector in 2008 and 2009 and that carried over to the 2010 tax bill.”

Welch obviously didn’t want to dwell on the GE’s controversial tax situation and quickly switched subjects to Jeremy Lin and a pretty stellar Reuters article the two authored about how to “liberate your bench” and utilize the Jeremy Lins of the business world.

“In a rational system, a corporation’s tax department would be there to make sure a company complied with the law,” said Len Burman, a former Treasury official who now is a scholar at the nonpartisan Tax Policy Center. “But in our system, there are corporations that view their tax departments as a profit center, and the effects on public policy can be negative.”

Watch O’Brien’s interview with the Welch duo below, courtesy of CNN: