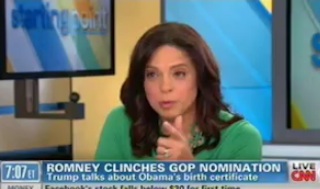 The controversy over Donald Trump‘s suspicions over whether President Obama was really born in the United States brought fireworks to the set of CNN’s Starting Point on Wednesday when host Soledad O’Brien played a clip of a Mitt Romney speech from last night that she claimed may have referred to the birther movement.

“Will Cain, what was that about?” O’Brien questioned.

“I think that was about promoting businessmen as appropriate leaders of the United States,” Cain replied.

“Come on,” Cain interjected as O’Brien began to pose a question to another panelist. “You said ‘Will Cain’ and you didn’t get the answer you liked.”

“No, it’s not the answer I like,” O’Brien said. “I think you’re not being honest with me.”

“Excuse me, when I’m accused of being dishonest, you can be assured I will respond,” Cain responded.

“I think that this is the unfortunate happenstance of including Donald Trump in your news coverage and letting him drive birtherism, because then we get to expand the narrative to assume that everything Mitt Romney says when he’s speaking on the value of business experience that you can read into that,” Cain began.

“No no no, we’ve heard it. You can play it as soon as I’m done, but let me finish my statement,” Cain said. “You can use that narrative to expand it to say that every little thing that Mitt Romney says in an excuse for birtherism.”

“I’m not saying every little thing,” O’Brien argued. “I’m saying this particular clip where he talks about changing the constitution — because the age, the birth place, the citizenship and then goes on and goes on to talk about the business. Let’s play the clip…”

O’Brien then played the clip a second time.

“On the day when ‘birther’ is something that Donald Trump has raised as your top story in the news you’re really going to do that? Just happens to be,” O’Brien noted.

Watch O’Brien and Cain argue over Romney’s speech below: