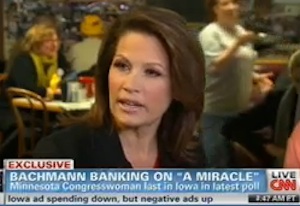 On CNN’s Starting Point Tuesday morning, Soledad O’Brien and Republican presidential hopeful Michele Bachmann got into a tussle over “gotcha questions” ahead of today’s caucuses. “You have taken a lot of flak for some of your very strong social issues, where you stand on them, and I want to talk about some of them,” O’Brien pressed. “Your stance on homosexuality — and want to read a little bit of what you said — You said, at the Educators Conference in 2004, ‘Gays live a very sad life,’ and that ‘it’s part of Satan’ And that’s quote. You’ve taken a lot of flak for that. Do you pull back on any of that?”

“It’s a bizarre thing to bring up.” Bachmann countered. “Today is the election, what people recognize is that the most important issue that people will be looking at is, ‘Who is the best person to deal with the economy?’ Probably someone who’s created the a business from scratch. I came from a family where I was below poverty. I had to earn my way up out of poverty.”

“What you’re telling me is you don’t want to discuss social issues because you want to talk about the economy? I don’t think it’s a bizarre question. I think it’s a fair question,” O’Brien replied.

“It’s a gotcha question coming way out of the past,” Bachmann affirmed. “I stand very strong for marriage between one man and one woman. I believe in protecting human life from conception until natural death. I believe in the family, I believe in religious liberty and for people to practice their faith freely. That’s important. It’s also important we get rid of Obamacare. Obamacare is socialized medicine — is wildly unpopular. Of all of the candidates in the race, I’m the one who led 40,000 Americans to object to Obamacare, and I’m the one who means what I said. I say what i mean. I’m very consistent. People know that they can count on me. I won’t be shifting my positions over the years.”

Watch the somewhat contentious interview with O’Brien and Bachmann below via CNN: