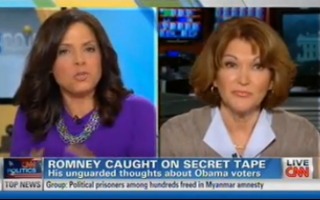 Starting Point host Soledad O’Brien and Romney adviser Bay Buchanan entered into an increasingly heated argument over comments made by Mitt Romney — both his recently-released remarks about to wealthy fundraisers and a previous comment he’d made about not focusing on the “very poor.”

RELATED: Bay Buchanan On Reports Of Trouble In Romney Camp: Base ‘Energized,’ But You Can’t Make Everyone Happy

Buchanan argued that Romney offers a contrast to Obama, because “Barack Obama wants you to spend more, and we say, Mitt Romney says that’s not the right way. The right way is to give these people who are out there, who are finding they need food stamps, an opportunity to, again, be able to work and produce and take care of themselves and family. And have that–”

“Forty-seven million Americans are on food stamps,” said Buchanan. “And that is a national disgrace; you have to agree.”

“You know, Soledad. Let me make a point,” said Buchanan. “I do believe that the majority of Americans, without question, way more than 47%, whether they’re dependent now on different aspects of government, they want to again see the kind of enormous opportunity out there for their children and for themselves. That they can really pick and choose the kind of jobs that they can take. That is what he offers.”

“I bet he wished he’d said that,” O’Brien responded. “But he didn’t offer it. I bet today he wishes he’d said ‘what Bay just said, I wish I had said that at that dinner.’ Because today the clips that we’re talking about, he didn’t say that. He said 47% of the nation are basically losers, they consider themselves to be–”

“No, he did not,” O’Brien continued. “He said they are victims, they believe the government has a responsibility for them. ‘My job is not to worry about them. I’ll never convince them to have personal responsibility’ — implied: they don’t. ‘I’ll never convince them to care for their lives’ — implied: they don’t. That’s what he said.”

O’Brien then brought Buchanan’s attention to a joke Romney had made about having more of a shot at “winning this thing” if he’d been Latino on the same day he’d addressed the Hispanic Chamber of Commerce and had highlighted high unemployment numbers for Latinos and, later, brought up a comment Romney had made to her about not being concerned about the “very poor,” because they have safety net in place that he will fix if it needs fixing.

“There is a sense,” O’Brien concluded, noting a recent Politico article about issue sprouting up among Romney’s staff, “that the campaign is in big trouble.”