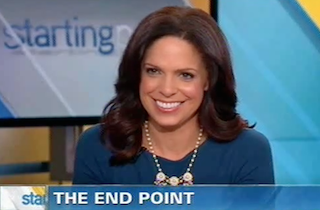 Friday marked Soledad O’Brien‘s last day hosting Starting Point — so during the “End Point” segment, the panel offered her a warm farewell, sharing their fondest memories of the show. Signing off, O’Brien recalled the man behind some of her more explosive interviews and offered the wisdom she’s gained through the experience: “Facts matter.”

Paired with friendly jibes, Will Cain and Roland Martin spoke of their good relationship with O’Brien, both personally and professionally, while Ryan Lizza gave “a shout-out to a year’s worth of some of the best interviews with politicians.” Last but not least, John Berman lamented that “John Sununu could not be here this morning” — and thanked O’Brien for an “interesting, fantastic year.”

O’Brien herself spoke of the chance CNN has given her “to cover some of the biggest stories” of our time. Specifically, she told an anecdote about Hurricane Katrina coverage, recalling the standing ovation the team received “because we had covered the story so well.”

“I think if I’ve learned anything over the past year,” she said, “it’s that facts matter. And we shouldn’t be afraid to have tough and honest conversations, and maybe even argue a little bit when there’s a lot at stake. And yes, Gov. Sununu, I am talking to you.”

O’Brien will still be producing specials/documentaries for CNN and will be working with her production company on those projects going forward. CNN’s new, still-unnamed morning show — co-hosted by Chris Cuomo and Kate Bolduan — will premiere later this spring.