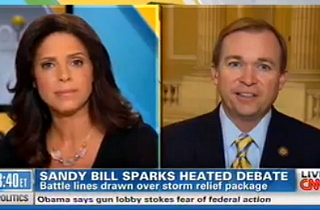 This morning on CNN’s Starting Point, Soledad O’Brien challenged Rep. Mick Mulvaney (R-SC) to defend his opposition to the newest Hurricane Sandy relief package despite his previous support for packages aiding his own state after natural disasters.

The Republican congressman made clear that he believes disaster relief is “a proper and appropriate function of the government,” but that he cannot support the current Sandy relief bill because of its lack of spending offsets.

The bill is expected to come to vote in the House today. For the previous, smaller Sandy aid package, Mulvaney was one of the 67 Republicans who voted against it.

“My difficulty with [the new relief package] is simply that it is not paid for,” he explained. “We’re borrowing this additional money and I think that’s wrong. I’m hoping we can figure out a way today during the amendment process to find savings elsewhere to pay for this without adding to the debt.”

O’Brien then challenged Mulvaney by listing all the previous disaster aid packages that did not include the financial offsets he now seeks, including one that helped his home state of South Carolina after Hurricane Hugo in 1989. She played a soundbite from New Jersey Gov. Chris Christie claiming he does not expect the federal government to do any more for NJ than it did for the residents of the Gulf region after Katrina, and Joplin, Missouri, after the tornado outbreak.

“It’s a fair point,” Mulvaney responded. “I would encourage the governor and everybody else to consider the fact in 1989, and even as late as Katrina several years ago, the debt was much, much smaller. 1989 it was $2 trillion or $3 trillion. It’s five and six times larger than that today.”

He continued: “We cannot continue to do what we’ve done in the past. That’s how we arrived where we are. We have disasters every single year. We don’t know where they’re going to be. But we spend disaster money every single year, something for which we could budget.”

“I’m not against doing this,” he concluded, “but I think the days of just being able to say okay let’s borrow money from China to do this and that have come and gone.”