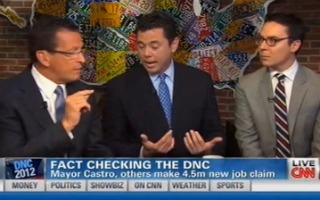 On Wednesday, Starting Point host Soledad O’Brien and her guest panel took a look at the previous night’s DNC speeches and fact-checking a few points presented, particularly where job numbers are concerned.

“And by the way,” he continued, “when you talk about your desire to create jobs, where have you been on a jobs bill?”

“We have passed out of the House 32 jobs bills that are sitting in the United States Senate,” Chaffetz replied. “The reality is we have passed a budget for two years in a row. The President in his plan, which is exemplified in a budget, has never had a single Democrat support it. Think about how stunning it is. The President’s budget this year had 99 to nothing; his budget was defeated and the House had 414-0. The President may say he has a plan, but nobody supports it.”

CNN’s Dana Bash then asked about the difficult of essentially proving a negative in attempting to “prove that things really really would be worse if we didn’t do these — take these steps.”

“I think I found the theme of the DNC tonight,” joked O’Brien.

“You want to refuse or deny-” Malloy continued.

“But, break even to what?” Malloy asked.

“To what the President came into office [with],” said the host.