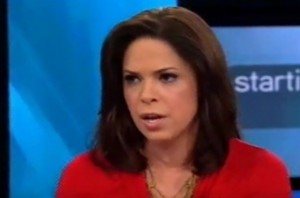 Starting Point anchor Soledad O’Brien gave former Massachusetts Governor Mitt Romney a helping hand into some hot water the other day when she elicited Romney’s now-famous “I’m not concerned about the very poor” remark. On Friday morning’s Starting Point, O’Brien and her panel challenged Gov. Romney’s later assertion that he “misspoke,” and that his remarks were simply a “slip up on a word.”

Romney’s gaffe dominated the political news cycle for a time, and initially, the candidate insisted that his remark just needed to be taken in context:

“No, no, no, no,” Romney said. “You’ve got to take the whole sentence, all right, as opposed to saying, and then change it just a little bit, because then it sounds very different. I’ve said throughout the campaign my focus, my concern, my energy is gonna be devoted to helping middle income people, all right? We have a safety net for the poor in, and if there are holes in it, I will work to repair that. And if there are people that are falling through the cracks I want to fix that.”

On Thursday night’s Hannity, Gov. Romney abandoned the context argument, and chalked his gaffe up to that political silver bullet, “I misspoke.”

The problem with that, as Soledad O’Brien pointed out on CNN this morning, is that he didn’t simply “slip up on a word,” or “misspeak.” Misspeaking is when you say “incinerate” instead of “insinuate.” When Romney made his statement on Wednesday’s Starting Point, O’Brien immediately asked him to clarify. “We will hear from the Democrat party, the plight of the poor,” Romney said. “And there’s no question: it’s not good being poor, and we have a safety net to help those who are very poor. But my campaign is focused on middle income Americans.”

It’s a fairly open-and-shut case on the superficial question of whether or not Romney “misspoke,” but O’Brien shifted the discussion to the deeper issue of the candidate’s blithe declaration that “if there are holes” in the “safety net,” he’ll fix them. “What is, really, Mitt Romney’s stance on certain issues? When we talks about ‘I’m going to repair that safety net,’ where does he stand on the things that we consider the safety net?”

National Journal‘s Ron Brownstein pointed out that Romney’s political positions are out of step with a safety-net-fixer. “The most important one is Medicaid, now an entitlement that provides health care for the poor and seniors,” Brownstein said. “He wants to convert that into a block grant. He wants to reduce the growth of federal spending on it to half the level it is now. $100 billion a year. Unless states find significant efficiencies that are eluded them before, that means fewer people being eligible and reduce benefits.”

That’s just one example, but Romney, and pretty much every other Republican, have shown, in deed, their willingness to weaken social safety nets in favor of other priorities, from the Paul Ryan budget plan that would end Medicare as we know it, forcing seniors to pay more than double for their health insurance, to his party’s consistent opposition to extending unemployment benefits.

There’s the rub, because a fair-minded person could look at Romney’s statement and conclude that, in electoral politics, nobody focuses on the very poor. As Jon Stewart noted, they have shitty lobbyists. The difference is that, despite an equal amount of pandering to the middle class, President Obama hasn’t sought to devastate programs that benefit the very poor. Romney and his party have, and they’re usually damn proud of it.