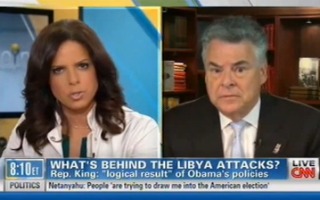 On Monday, Starting Point host Soledad O’Brien asked Rep. Peter King whether he thought that President Barack Obama and his policies are responsible for the recent death of the U.S.’s ambassador to Libya.

The President’s policies have sent a “confused message,” King said, adding that Obama “did virtually nothing to protect us and was actually putting out statements in Arabic sympathizing with the demonstrators and those attacking the American embassy. What it’s done is it’s created a climate which created an attitude in the Middle East where our allies don’t trust us.”

Later, O’Brien noted that King has been referring an “apology tour” on the President’s part, a narrative echoing those of several other Republicans — Donald Rumsfeld, Mitt Romney, and Tim Pawlenty among them. “Where do you see an apology?” she asked him. “You called it an ‘apology tour.’ You said ‘the apologies.’ What apologies are you specifically talking about?”

King pointed to a 2009 speech in Cairo and another the President had given in France, both of which O’Brien, consulting her papers, said did not contain the words “apology” or “I’m sorry.” King then argued that a “logical reading” of those speeches would come to the conclusion that the President was being apologetic.

“Everyone keeps talking about this ‘apology tour’ and ‘apologies’ from the President,” said O’Brien. “And I’m trying to find the words “I’m sorry, I apologize’ in any of those speeches — which I have the text of all those speeches in front of me. None of those speeches at all. And if you go to factcheck.org, which we check in a lot, they all say the same thing. They fact check this.”

‘Well, ok,” said O’Brien. ‘There are fact checks. You may not care, but they’re a fact checker.

“No, Soledad,” he replied. “What I’m saying is any common sense interpretation of those speeches, the President’s apologizing for the American position. That’s the apology tour. That’s the way it’s interpreted in the Middle East. If I go over and say that the U.S. has violated its principles, that the United States has not shown respect for Islam, that’s an apology. How else can it be interpreted?”

Have a look at their discussion, via CNN: