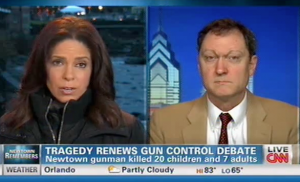 John Lott, the gun advocate who recently had a heated encounter with Piers Morgan, spoke to Soledad O’Brien on Monday morning — continuing to make his pro-gun argument. O’Brien had a hard time stomaching Lott’s perspective, telling him she simply does not understand it.

RELATED: Piers Morgan Explodes At Gun Advocate: ‘How Many Kids Have To Die’ Before You Change Your Mind?

The common feature across such attacks, Lott said, is that, with few exceptions, they’ve occurred where guns have been banned. “But there’s more than one thing in common, right?” O’Brien asked, adding that they’re armed, often with semi-automatic weapons.

The point, Lott underlined, is that these “gun-free” pockets are the ones that are targeted. Specifically, he spoke about the gunman who chose the movie theater in Aurora, as opposed to other nearby theaters. O’Brien countered that Lott hasn’t spoken to him and has no way of knowing the gunman’s thought process. “How do you know that?” she asked. “You don’t know that.”

“Why is your takeaway from all of this to get rid of gun laws — and your takeaway is not to say, ‘There are people who should not have access to certain types of weapons,'” O’Brien questioned.In this instance, she said, we know the gunman used a semi-automatic rifle to breaking into the building, rendering their security useless. “Why would you not say that’s exactly the kind of weapon that someone should not be able to easily get their hands on?”

Lott said that Germany had three of the five worst public shootings in the world. And Germany has extremely strict gun control laws. “Yet they’ve had a worse record,” Lott said.

“I don’t see how any of that brings you to the decision that the answer is to get rid of gun laws,” O’Brien said. A “rational person” would say there’s no reason to have access to the types of semi-automatic weapons in question, she argued. It’s “inappropriate.”

The pair were on opposite sides of the spectrum for the remainder of the segment, with O’Brien telling Lott at the end, “I appreciate you talking with me this morning, but I just have to say, your position completely boggles me, honestly. I just do not understand it.”