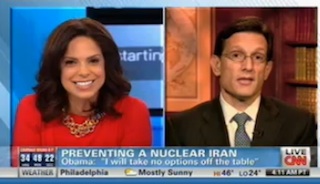 “Mitt Romney — again — Soledad, not to be repetitious, but he’s got a plan,” Cantor said. “There is no plan like his. There’s certainly no plan like his coming out of the White House. we need a pro-growth bold plan to help create jobs.”

RELATED: Eric Cantor: Economy Would Be Doing Better If It Weren’t For Obama’s Failed Policies

“Soledad, what I believe is this election is about how we’re going to make our country have a much brighter economic future so we can continue to lead and let America be America,” Cantor replied, but continued to avoid directly answering O’Brien’s question about whether Romney was the true conservative in the race.

Later in the interview, Cantor would not directly answer the CNN’s anchor’s questions about the future of Iran’s nuclear program should Obama have a second term: