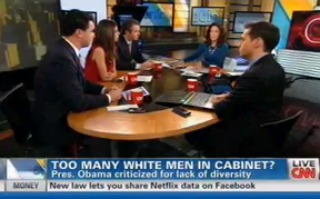 On CNN’s Starting Point Friday Soledad O’Brien placed a “$100” bet on whether President Obama‘s cabinet represents “what America looks like.” She ripped the administration for its lack of women and minorities in top White House positions.

O’Brien was disagreeing with former White House official Bill Burton on the issue and finally claimed, “Let’s get someone in our office to pick the top 50 people in the White House.”

She continued to slam the cabinet picks, saying:

“You would be wrong to make that assumption,” Burton retorted.

“Want to put money on that?” she asked.

The two made the bet and O’Brien said she will have staff at her show “crunch the numbers.”

Obama has repeatedly received criticism for his all white, all male cabinet picks from both Republicans and Democrats. Former Arkansas Governor Mike Huckabee blasted the president’s own “war on women” and Fox News contributor Kirsten Powers lamented the lack of diversity in the new cabinet. Others, like MSNBC’s Melissa Harris-Perry, have defended the nominations.