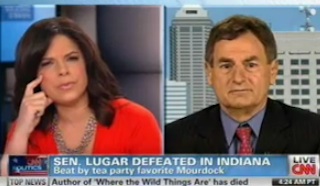 Victorious Indiana Republican Senatorial challenger Richard Mourdock stopped into CNN’s Starting Point on Wednesday morning on the heels of his defeat of Richard Lugar and was pressed by Soledad O’Brien over his affirmation to refuse to compromise in the Senate. “What would you say when people criticize you as saying you don’t understand the nature of the institution you’re running to represent the Senate which is really premised on the notion of compromising with your colleagues?” O’Brien asked.

“Well, I’m a huge student of American history and I recognize this is one of those times where there’s great polarization between the two parties,” Mourdock acknowledged. “And frankly the ideas for which the parties are working are really at opposite ends of the spectrum. I don’t think there’s going to be a lot of successful compromise. Hence you have the deadlock we have today. What I’ve said about compromise, I hope to build a conservative majority so bipartisanship becomes Democrats joining Republicans to roll back the size of government, reduce the bureaucracy, and get America moving again. The stimulus plan hasn’t worked.”

“Well, it is the definition of political effectiveness,” Mourdock countered.

“Well, the fact is, you never compromise on principles,” Mourdock replied. “If people on the far left they have a principle to stand by, they should never compromise, those of us on the right should not either. It may come in the finer details of the plan or the budget, but the real principles I’ve mentioned about having government rolled back in size, lowering taxes, those are the principles that caused me to get in this race. What has motivated many people to get out and work for us and we are at that point where one side or the other has to win this argument. One side or the other will dominate.”

“You told the New York Times, ‘the time for being has past,” said O’Brien. “When I talk to people frustrated about a lack of what’s getting done in Washington DC, I mean there’s genuine frustration and the anger can be seen in some of the poll numbers. I think approval is probably 17% approval for Congress. Doesn’t going in with an attitude potentially, of course, if you’re able to be victorious at the very end, that collegiality has passed and we’re going to be confrontational, doesn’t that actually just undermine any sense of trying to get Americans united and together and raise some of those numbers for approval, frankly?”

Watch O’Brien’s interview with Mourdock below via CNN: