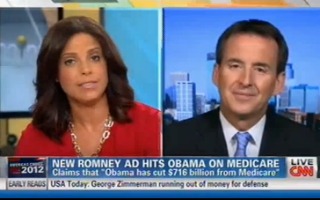 On Wednesday’s Starting Point, host Soledad O’Brien had a chat with Romney surrogate Tim Pawlenty about a new campaign ad claiming that President Barack Obama has cut $716 billion from Medicare.

“The CBO would say, and has said, it really is a reduction over 10 years in spending,” said O’Brien. “That’s from their March 30, 2011 report. The payment rates for most services, permanent reductions in the payment rates. But the next thing it says in that ad, ‘money you paid for guaranteed health care.’ But isn’t that just specifically not true? I mean, it’s not money anybody’s paid yet. It’s future spending, which still goes up. Isn’t that just patently untrue in that ad?”

“No. That’s not correct, Soledad,” Pawlenty replied. “There’s only one person in this race of the candidates running, president or vice president, who has proposed, signed into law, and voted for an actual cut in Medicare — and it’s a big one, and that’s the $716 billion — and his name is Barack Obama.”

The two then argued over whether to define the amount as a “cut” or a “permanent reduction.”

“i know exactly what it is,” Pawlenty told her. “Here’s what it is: it’s cuts to payments to medical providers so over the next 10 years, they’re going to get paid less than they would have otherwise been paid, which has all sorts of market implications.”

“No matter how you say this, it’s a cut to Medicare,” Pawlenty reiterated. “…you can’t even, with a straight face, look your viewers in the eye and tell you it’s not a cut in Medicare.”

“Well, I can’t look viewers in the eye from where I am,” joked O’Brien, adding that “I’m not saying either thing; I’m saying, the way the CBO puts it, I will read: ‘The permanent reduction in annual updates to payment rates for most services.’ That is a savings, if you’re talking about it — ”

“Do you know what that is in English?” asked Pawlenty.

“I speak English incredibly well, sir, as you know,” she replied.

“You can’t — there’s no way you can present that in any other way,” Pawlenty repeated later.

“Or you could call it a savings,” O’Brien told him.

The two then moved on to the subject of Romney’s budget plan, with O’Brien using a clip of Ryan attempting to explain it as evidence that it is “vague.”