Someone Finally Asked Christie About Bridgegate at a NJ Town Hall 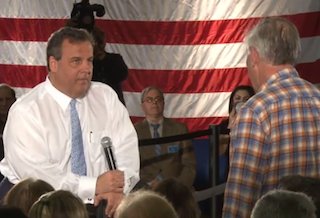 Governor Chris Christie continued his town hall tour of New Jersey Thursday with a stop in Flemington. And it was there that someone in the audience finally stood up and confronted him about the Bridgegate scandal that has plagued his administration over the past several months.

After some pleasantries about how Christie looks “better in person” than he does on TV, the man in question turned more serious, asking Christie specifically about the reason behind the firing of Christie aide Bridget Anne Kelly. When Christie announced that he had let Kelly go in early January, he said it was because she had lied to him and not because of her involvement in a plot to close access lanes to the George Washington Bridge as political retritbution against Fort Lee Mayor Mark Sokolich.

“I know that if a subordinate lies to you that’s a big blow to your ego, esteem, self-respect and everything like that,” the man told Christie. “I think that is ia very self-centered for firing somebody. Her real offense was being involved in the shutting down of the George Washington Bridge.” With the firing “contingent on the lie,” the man wanted to know if Christie would have kept her on had she told him the truth.

“First off, there are lots of reasons for the firing,” Christie replied, saying he could not have someone working for him who was lying. “Do not take from my silence, on the act, that the act was countless, in fact the whole press conference was about the fact that what happened was absolutely unacceptable and that I didn’t know anything about it and if I had, I wouldn’t have permitted it.”

“Don’t take from the fact that I said I fired her because she lied,” Christie added, “that that means if she had told me the truth — if she had told me the truth she would have gotten fired too because of what she did. But I never had the chance to hear the truth.” During his two hour press conference on January 9th, Christie told the press he did not even ask Kelly for an explanation after he fired her.

Ultimately, he thanked the man for giving the opportunity to discuss the issue further, but the man who asked the question was not entirely satisfied, arguing that Christie should have stood up during his press conference and said he fired Kelly “because she was involved in an illegal act.”

Christie evidently felt good enough about his response to post the full clip to his own YouTube channel. Watch video below: