Someone Finally Called Out Oprah For Buying a $38,000 Handbag 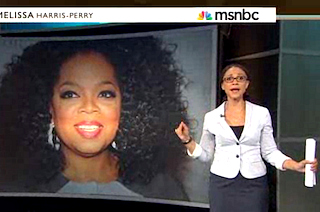 Fresh from the It’s About Damned Time file, someone finally called out Oprah Winfrey for her attempted impulse buy of a $38,000 purse.

By now you know the story: during a trip to Zurich for Tina Turner’s wedding, Winfrey told Entertainment Tonight last week, she was denied the purchase of $38,000 Tom Ford handbag by a store clerk who doubted could afford it. This incident served as an unfortunate encapsulation of racism’s ability to leak through economic, national, and even celebrity barriers, a reminder that no one, even those who make $70 million per year, is ever safe from its scourge.

But the stink of prejudice combined with Winfrey’s inexhaustible generation of goodwill to obscure what an ostentatious display of status and wealth Winfrey’s story was offering in exchange for sympathy. Or, in the words of MSNBC host Melissa Harris-Perry: “Denied her right to buy a $38,000 handbag! The outrage!…This particular slight might be well categorized as #one-percenter problems.”

While rightfully acknowledging racism’s acidity no matter your economic strata, Harris-Perry placed Winfrey’s purchase into much-needed socioeconomic perspective by unveiling the “Nerdland’s Guide To Spending $38,000,” which included a two-story house in Buffalo, a year’s tuition for the show’s intern, or, most pointedly, thirty months of food for a family of four, which would also work out to eleven years of SNAP benefits for an average family. Many people, Harris-Perry was saying, are prevented by systemic inequality from getting enough to eat, let alone an exorbitant status symbol; and for them, the obstacles to food and shelter is more than just a snooty shop clerk.

If Winfrey’s story was a potent study in racism’s power to track you even into an upper income tax bracket, it’s also a harsh reminder that freedom slides along the axis of class as much as race. The generally sympathetic coverage of Winfrey’s story in the past few days has too neatly elided this lesson. Harris-Perry deserves credit for vocalizing it.